Karma Wins by a Nose 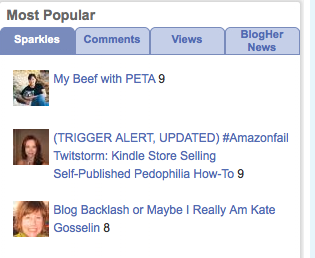 I am going straight to Mom Hell. (If anyone else cares to join me, I am sure we will have a nice time together. Just follow my lead.)

After writing my post about Aidan’s embarrassment and outrage over a story in my blog, I decided to go one step further and throw it out to the Mecca of blogs written by women: BlogHer. Members can randomly write posts for the blogging community and I thought that this story was relevant. It’s the first time I dabbled in the Blogosphere to get some street cred and props from my peeps — and frankly, I really don’t know what I am doing. (Nor can I speak gangsta. Obviously.)  My goal was to be buried under the Tech Tab and hope that other writers would comment on how they handle similar situations regarding their kids’ material.

Well, holy crap: a BlogHer editor contacted me and said that the story would be featured on their website’s homepage for that day! So the exposé about Aidan’s petrified turds and his disgust of me pimping him out for material was read over 2300 times. The article was also debated on their Facebook page: “Do your kids know what you are saying about them on your blog?” Hooray for the exposure! Boo for the potential to get my ass kicked by the Sisterhood of Bloggers. I was breaking out into hives and eating every piece of leftover Halloween candy in the house.

Then I had that sick feeling in my chest that happens when I really screw something up. “You frickin’ dingbat. This is exactly how Aidan felt to be so vulnerable to the online world.” I need to get my kids’ approval on future stories or change their names. Or buy them a dog.

Fortunately, everybody was pretty nice with their comments. I did seem to rub one woman the wrong way, but after creeping on her blog, I figured that we wouldn’t be friends in real life anyway. She was way too smart and wrote a lot about capitalism. Or at least I think that’s what she was writing about. I’m not really bright. Which I confirmed with the free IQ test on her home page.

The entire day was an exciting roller coaster ride of stalking the sites to see if people were bashing me or digging the story. Quite pleased and humbled that it went over well, I made plans to expand my site to accept advertisers. At bedtime, I went to tuck in Aidan, silently promising him that if he kept providing great material I would handle it with care. And marketing. I just gazed at my little Money Maker and leaned down to give him a big “momma needs a new pair of shoes” smooch. Right at that exact moment, he popped up to give me a kiss and his noggin smacked me in the nose. We both heard that sickening “crack” sound. The poor guy was all worried if I was okay. But I had a feeling that the beak was broke.

Frankly, it’s a miracle that this hasn’t happened before by us just walking in the same room. He has an enormous melon and I have a big nose.  Plus the exact same thing happened to me six years ago.

I was dropping Eileen off at preschool and bent down to kiss her goodbye as she jumped up. Full head contact with the old schnoz was the shot heard across the preschool. I literally had stars in my head and bit through my lip to not cry and curse in front of the kiddos and parents. The second I loaded two-year old Aidan back into the car, I sobbed the whole way home. Every time I sniffed, he sweetly said, “Blesh you” which made me cry even harder. My dad came over and I went over the ER and sure enough, it was broken in two places, so they referred me to an ENT. The ENT confirmed that I would have to get knocked out so they could put it back in place. Out of curiosity, I asked the doc if he could whittle my nose down a little while he was in there. What followed was a fifteen-minute dissertation about everything that was wrong with my nose from its vast amount of cartilage to the broad bridge. It would be a big job to transform that honker into a button. Great, thanks anyway.

So I got my nose back in joint and had to wear a splint on my face for a week. I am sure that the neighborhood rumor was that I finally got a nose job. Imagine their shock when I took it off and had the same face! “She should get her money back!” 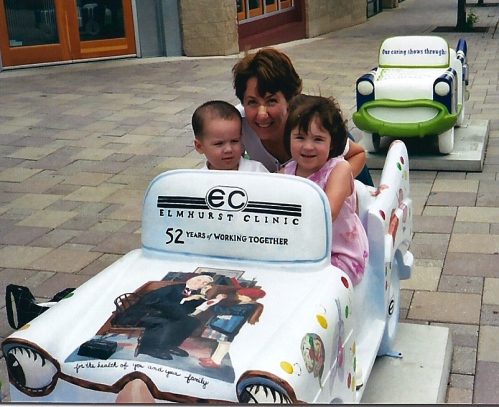 The morning after Aidan’s head butt, I asked my husband if my face looked different. Mind you, I had just woken up so it was a loaded question. Like any other day, the bags under my eyes were black and my face was completely puffy, embedded with sheet marks. I might as well have asked if these jeans made my butt look big.

“Uh, you look the same to me. Maybe you should go to the doctor to be sure,” he safely and wisely answered.

So I headed off to the Immediate Care where they did x-rays and discovered that it wasn’t broken. I had a contusion, which is a fancy name for “What goes around, comes around. Mom.”

Instant Karma’s gonna get you,
Gonna knock you right on the head,
You better get yourself together,
Pretty soon you’re gonna be dead,
What in the world you thinking of,
Laughing in the face of love,
What on earth you tryin’ to do,
It’s up to you, yeah you.

Instant Karma’s gonna get you,
Gonna look you right in the face,
Better get yourself together darlin’,
Join the human race,
How in the world you gonna see,
Laughin’ at fools like me,
Who on earth d’you think you are,
A super star,
Well, right you are.

10 responses to “Karma Wins by a Nose”